In my attempts to describe the interconnected diversity of perspectives within my faith tradition, I found myself focusing upon the complementary characteristics of creative polarities we hold together., and the energy between them.  I  began with rationalism and mysticism after reading a sermon by the Rev. Lex Crane while flying to a conference, sketching on the back of my agenda. Lex pointed out that one takes things apart to understand them, while the other puts things together into a larger whole.  Each brings its own wisdom into the circle; each is incomplete and even dangerous if carried to an extreme that denies or diminishes the other.  This one polarity led to the six main spokes, followed by two others a bit later.

The spokes are connected to our Unitarian and Universalist history (those on the right being added in more recently to balance those on the left).  A primary gift from each is named at its base, and later a spiritual discipline was added from its tip.  The left side has Western roots; the right side more Eastern and Aboriginal roots. The whirlwind form, from a Navajo sign, indicates that nothing portrayed is static.  Over the years, the mandala has acquired about 50 polarities (as in "Describe your faith tradition in 100 words or less!!).  A number of colleagues use it for meditation purposes, reflecting upon their natural comfort zones, and where their growing, dancing and even "fighting" edges are.

I have also portrayed this Mandala at times with the center empty, as a creative listening space - the crack in the cosmic egg, the place where the Spirit finds an opening to enter in and energize new being. There are two versions below, the first more simple, the second the evolved complex form. 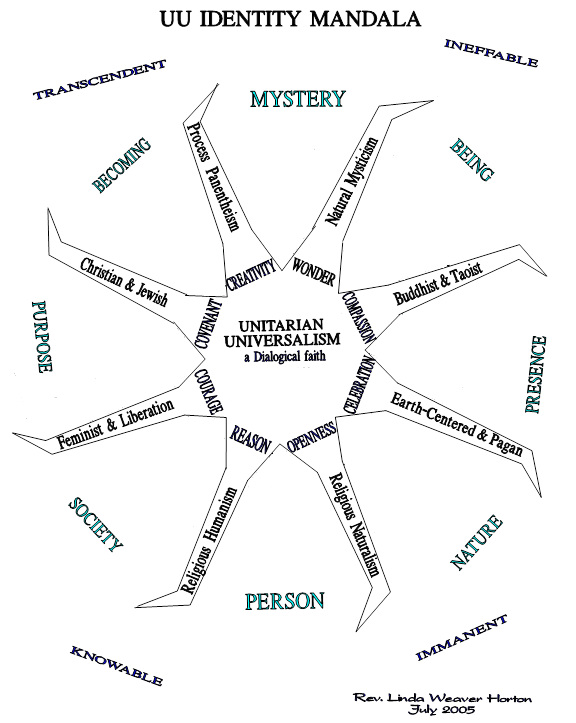 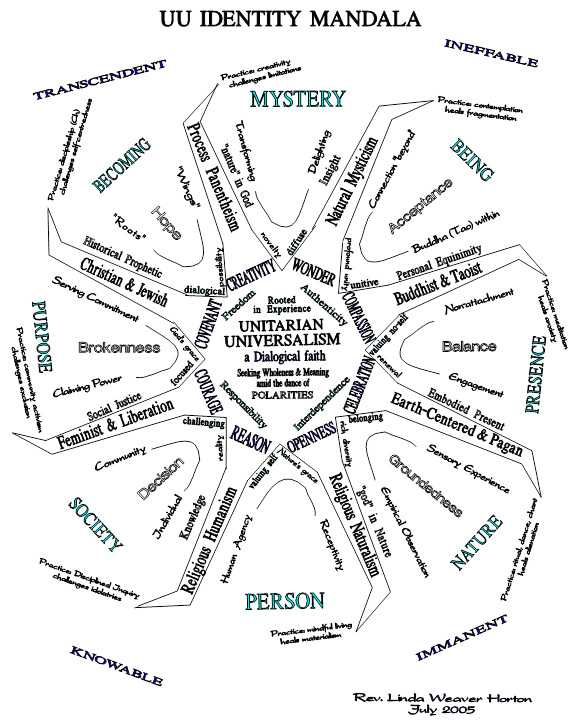